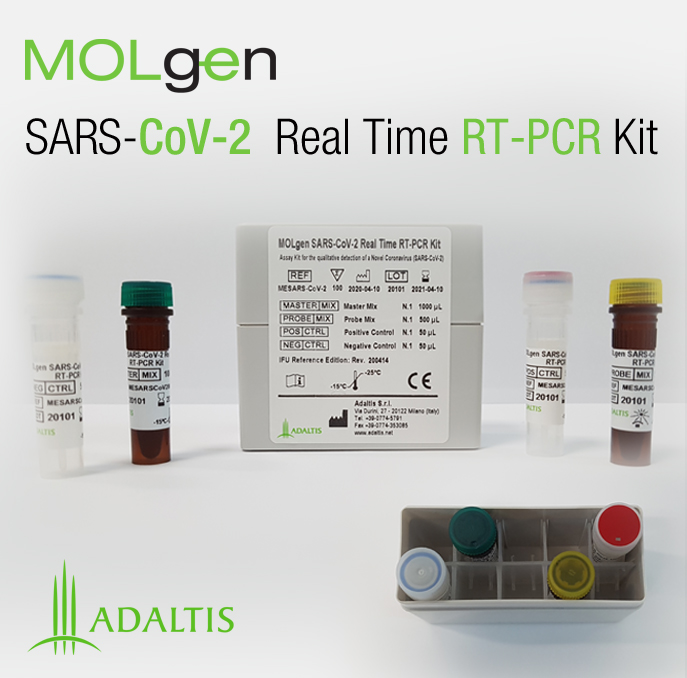 Please pay attention to the revision of the document that must be the same as the revision reported in the box label.
In case of discrepancy please contact our Customer Care e-mail: info@adaltis.net.

* Other document related to the product available at Documentation Centre and it is accessible for Adaltis distributors/partners after registration only.

SARS-CoV-2 (Severe Acute Respiratory Syndrome Coronavirus 2) is a new strain of coronavirus emerged from Wuhan, China in December 2019.
The infection with SARS CoV2 virus causes Coronavirus disease (COVID-19) where "CO" stands for crown, "VI" for viruses, "D" for disease and “19'" indicates the year in which it occurred.

Real-time PCR is based on the detection of the fluorescence produced by a reporter molecule, which increases as the reaction proceeds. Reporter molecule is a dual-labeled DNA-probe that specifically binds to the target region of the pathogen’s cDNA. Fluorescence signal increases due to the separation of fluorescence dye and quencher owing to Taq DNA-polymerase exonuclease activity during amplification. PCR consists of repeated cycles: temperature denaturation of cDNA, primer annealing and complementary chain synthesis.

Threshold cycle value (Ct) is a cycle number, at which the fluorescence generated within a reaction crosses the threshold and the fluorescence signal rises significantly above the background. The increased signal is due to the use of a DNA hybridization probe that is specific for the given cDNA sequence: it binds to the cDNA in the course of reaction and provides additional specificity of the method. The DNA probe consists of a fluorescence dye at the 5’-end and a fluorescence quencher at the 3’-end that significantly reduces the fluorescence intensity. During the polymerase synthesis of the complementary strand, the probe is cleaved from the 5’-end due to the 5’-3’ nuclease activity of Taq DNA polymerase, the quencher and the dye become separated thus increasing the fluorescence signal due to accumulation of the reaction product. The detected fluorescence intensity depends on the initial quantity of pathogen’s cDNA template in the sample.

The results of PCR analysis are taken into account in complex diagnostics of disease. The kit is validated for use with: AMPLIlab (Adaltis), CFX96 (Bio-Rad).

Ready to use reagent.
It contains reagents for reverse transcription and amplification.

Ready to use reagent.
It contains primers and probes which are premixed to the working concentrations.

Ready to use control.
It contains plasmids with SARS-CoV-2 sequences (RdRP, E, S and N genes) plus an Internal Control (IC).

Ready to use control.
Negative Control should be included at every run as it indicates that reagents have not been contaminated.

Materials Required But Not Supplied

E. MATERIALS AND DEVICES REQUIRED BUT NOT SUPPLIED

Specimens can be stored at 2…8°C for up to 72 hours after collection or at -70°C for longer periods.

NOTE: The extraction protocol with MOLgen Universal Extraction Kit (Adaltis) Ref. ME188830 and the PCR set-up procedure can be done in automated mode using the Adaltis EXTRAlab Instrument by executing the extraction and PCR set-up protocol preloaded in the instrument user interface.

This document is available for registered accounts only