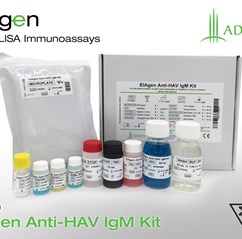 Please pay attention to the revision of the document that must be the same as the revision reported in the box label.
In case of discrepancy please contact our Customer Care e-mail: info@adaltis.net.

* Other document related to the product available at Documentation Centre and it is accessible for Adaltis distributors/partners after registration only.

Enzyme ImmunoAssay (ELISA) for the determination of IgM class antibodies to Hepatitis A Virus in human plasma and sera with the "capture" system. The kit may be used for the identification of the viral agent causing hepatitis in the patient and the follow up of the acute phase of the infection. For “in vitro” diagnostic use only.

The Center for Disease Control or CDC, Atlanta, USA, defines Hepatitis A Virus as follows:

Hepatitis A continues to be one of the most frequently reported vaccine-preventable diseases in the world, despite the licensure of hepatitis A vaccine in 1995. Widespread vaccination of appropriate susceptible populations would substantially lower disease incidence and potentially eliminate indigenous transmission of hepatitis A virus (HAV) infection. HAV, a 27-nm RNA agent classified as a picornavirus, can produce either asymptomatic or symptomatic infection in humans after an average incubation period of 28 days (range, 15-50 days). The illness caused by HAV infection typically has an abrupt onset of symptoms that can include fever, malaise, anorexia, nausea, abdominal discomfort, dark urine, and jaundice. The likelihood of having symptoms with HAV infection is related to the person's age. In children less than 6 years of age, most (70%) infections are asymptomatic; if illness does occur, it is not usually accompanied by jaundice. Among older children and adults, infection is usually symptomatic, with jaundice occurring in greater than 70% of patients. Signs and symptoms usually last less than 2 months, although 10%-15% of symptomatic persons have prolonged or relapsing disease lasting up to 6 months. In infected persons, HAV replicates in the liver, is excreted in bile, and is shed in the stool. Peak infectivity of infected persons occurs during the 2-week period before onset of jaundice or elevation of liver enzymes, when the concentration of virus in stool is highest. The concentration of virus in stool declines after jaundice appears. Children and infants can shed HAV for longer periods than adults, up to several months after the onset of clinical illness. Chronic shedding of HAV in feces does not occur; however, shedding can occur in persons who have relapsing illness. Viremia occurs soon after infection and persists through the period of liver enzyme elevation. Hepatitis A cannot be differentiated from other types of viral hepatitis on the basis of clinical or epidemiologic features alone. Serologic testing to detect immunoglobulin M (IgM) antibody to the capsid proteins of HAV (IgM anti-HAV) is required to confirm a diagnosis of acute HAV infection. In most persons, IgM anti-HAV becomes detectable 5-10 days before the onset of symptoms and can persist for up to 6 months after infection. Immunoglobulin G (IgG) anti-HAV, which appears early in the course of infection, remains detectable for the person's lifetime and confers lifelong protection against the disease. Commercial diagnostic tests are available for the detection of IgM and total (IgM and IgG) anti-HAV in serum. HAV RNA can be detected in the blood and stool of most persons during the acute phase of infection by using nucleic acid amplification methods, and nucleic acid sequencing has been used to determine the relatedness of HAV isolates. HAV infection is acquired primarily by the fecal-oral route by either person-to-person contact or ingestion of contaminated food or water. On rare occasions, HAV infection has been transmitted by transfusion of blood or blood products collected from donors during the viremic phase of their infection. In experimentally infected nonhuman primates, HAV has been detected in saliva during the incubation period; however, transmission by saliva has not been demonstrated. Depending on conditions, HAV can be stable in the environment for months. Heating foods at temperatures greater than 185 F (85 C) for 1 minute or disinfecting surfaces with a 1:100 dilution of sodium hypochlorite (i.e., household bleach) in tap water is necessary to inactivate HAV. Because most children have asymptomatic or unrecognized infections, they play an important role in HAV transmission and serve as a source of infection for others. In one study of adults without an identified source of infection, 52% of their households included a child less than 6 years old, and the presence of a young child was associated with HAV transmission within the household. In studies where serologic testing of the household contacts of adults without an identified source of infection was performed, 25%-40% of the contacts less than 6 years old had serologic evidence of acute HAV infection (IgM anti-HAV).

Principle of the Method

The assay is based on the principle of "IgM capture" where IgM class antibodies in the sample are first captured by the solid phase coated with anti hIgM antibody.

After washing out all the other components of the sample and in particular IgG antibodies, the specific IgM captured on the solid phase are detected by the addition of a purified preparation of inactivated HAV, labelled with an antibody conjugated with peroxidase (HRP).

After incubation, microwells are washed to remove unbound conjugate and then the substrate is added. In the presence of peroxidase the colorless substrate is hydrolysed to a colored end-product, whose optical density may be detected and is proportional to the amount of antibodies to HAV present in the sample.

This document is available for registered accounts only